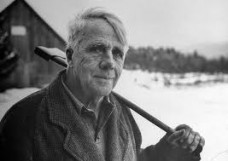 1.  The woods are lovely, dark and deep. But I have promises to keep, and miles to go before I sleep.

2.  In three words I can sum up everything I’ve learned about life: it goes on.

3.  Poetry is when an emotion has found its thought and the thought has found words.

4.  Two roads diverged in a wood and I – I took the one less traveled by, and that has made all the difference.

5.  Forgive me my nonsense, as I also forgive the nonsense of those that think they talk sense.

6.  You can’t get too much winter in the winter.

7.  Freedom lies in being bold.

8.  The best way out is always through.

9.  A diplomat is a man who always remembers a woman’s birthday but never remembers her age.

10. Education is the ability to listen to almost anything without losing your temper or your self-confidence.

12. A poem begins as a lump in the throat, a sense of wrong, a homesickness, a lovesickness.

13. A bank is a place where they lend you an umbrella in fair weather and ask for it back when it begins to rain.

15. Nothing can make injustice just but mercy.