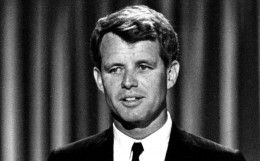 2. We must continue to prove to the world that we can provide a rising standard of living for all men without loss of civil rights or human dignity to any man.

3. Every generation inherits a world it never made; and, as it does so, it automatically becomes the trustee of that world for those who come after. In due course, each generation makes its own accounting to its children.

4. Elections remind us not only of the rights but the responsibilities of citizenship in a democracy.

5. Few will have the greatness to bend history itself; but each of us can work to change a small portion of events, and in the total; of all those acts will be written the history of this generation.

6. Only those who dare to fail greatly can ever achieve greatly.

7. Ultimately, America’s answer to the intolerant man is diversity, the very diversity which our heritage of religious freedom has inspired.

8. Since the days of Greece and Rome, when the word ‘citizen’ was a title of honor, we have often seen more emphasis put on the rights of citizenship than on its responsibilities.

9. There are people in every time and every land who want to stop history in its tracks. They fear the future, mistrust the present, and invoke the security of a comfortable past which, in fact, never existed.

10. Automation provides us with wondrous increases of production and information, but does it tell us what to do with the men the machines displace? Modern industry gives us the capacity for unparalleled wealth – but where is our capacity to make that wealth meaningful to the poor of every nation?

11. Hand in hand with freedom of speech goes the power to be heard, to share in the decisions of government which shape men’s lives.

12. One-fifth of the people are against everything all the time.

13. Communism everywhere has paid the price of rigidity and dogmatism. Freedom has the strength of compassion and flexibility. It has, above all, the strength of intellectual honesty.

14. Progress is a nice word. But change is its motivator. And change has its enemies.

15. The world of sports knows no religious, racial or political differences. Athletes, from whatever land they come, speak the same language. The lessons of competition are lessons for life.