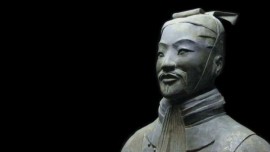 1.  The supreme art of war is to subdue the enemy without fighting.

2.  If you know the enemy and know yourself you need not fear the results of a hundred battles.

3.  Know thy self, know thy enemy. A thousand battles, a thousand victories.

4.  The art of war teaches us to rely not on the likelihood of the enemy’s not coming, but on our own readiness to receive him; not on the chance of his not attacking, but rather on the fact that we have made our position unassailable.

6.  Invincibility lies in the defence; the possibility of victory in the attack.

7.  Pretend inferiority and encourage his arrogance.

8.  He will win who knows when to fight and when not to fight.

9.  Thus, what is of supreme importance in war is to attack the enemy’s strategy.

10. A good commander is benevolent and unconcerned with fame.

12. Know your enemy and know yourself and you can fight a hundred battles without disaster.

13. Regard your soldiers as your children, and they will follow you into the deepest valleys; look on them as your own beloved sons, and they will stand by you even unto death.

14. If your opponent is of choleric temper, irritate him.

15. Victory usually goes to the army who has better trained officers and men.