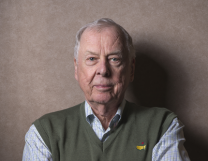 2.  To me, emails are a little bit frustrating. I think that the telephone is much preferred because you get the sound of the voice and the interest and everything else you can’t see in an email.

4.  If you can provide the funding and you get the leadership, you’ll have a competitive team.

5.  I’m a Republican. I don’t want to go to heaven and have to face my family up there and tell them I voted for a Democrat.

8.  You give the money where you want it.

9.  If you don’t have a refinery operating, it’s hard to use oil that’s available.

11. It’s important to understand that oil and renewables do different things. Wind and solar are for power generation, so they don’t replace oil. About 70% of all oil produced is used for transportation fuel. Renewables are good projects, but they don’t get us off of foreign oil.

12. We’re going to have shortages and prices are going to go up. Gasoline is going to be extremely tight for us.

14. Natural gas is a better transportation fuel than gasoline, so if that’s the case, it’s cheaper, it’s cleaner and it’s a domestic resource.

15. Chief executives, who themselves own few shares of their companies, have no more feeling for the average stockholder than they do for baboons in Africa.