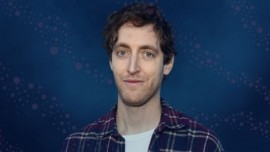 2.  By the very nature of satire or parody, you have to love and respect your target and respect it enough to understand every aspect of it, so you can more effectively make fun of it.

3.  It is good to connect to someone who reminds you that you have some real authenticity.

4.  Slowly but surely, I went through different phases of fame, and each rises you further into isolation and alienation.

5.  I consider myself a fairly ethical individual while I do have a lot of dichotomies within me. We’re all victims of our own hypocrisy at times.

6.  I drink a fair amount of ramen noodles.

7.  There is no place for a person like me in a world that only takes itself seriously. Satire is so necessary but fairly ineffective.

9.  Mucinex were like, ‘Would you like to be the Mucinex man? You sound like you’re sick right now’. In each spot, they give me a little bit of room to do something strange. And in a world of fractured mediums, where there is no zeitgeist, and you get your comedy from your phone, it’s all content.

10. When you get into a car, and there’s trash, or it’s dirty, or one of the hubcaps is off, you’re like, ‘Come on, dude.’ Every woman likes the confidence and self-respect that says, ‘I get oil changes. I look after my vehicle.’ That’s what I recommend: Act like you don’t care, but take care of your body.

11. I wouldn’t want to be Superman. Batman would be cool. But the one I’ve always wanted to play is the Joker. There is a maniacal and dangerous side to me.

12. There’s sketch, improv, writing, acting, music, and badminton. Those are the seven forms of comedy. But I do like the idea of being an auteur in the sense of writing and being in your own stuff.

13. My face is oblong. But the best grooming is confidence.

14. Effective satire has to be almost identical to the subject that it is skewering.

15. Comedy gives you a shot of euphoria that distracts you from everything that’s awful.