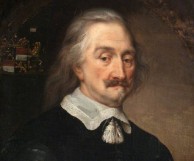 1.  It is not wisdom but Authority that makes a law.

2.  The right of nature… is the liberty each man hath to use his own power, as he will himself, for the preservation of his own nature; that is to say, of his own life.

3.  Curiosity is the lust of the mind.

4.  During the time men live without a common power to keep them all in awe, they are in that conditions called war; and such a war, as if of every man, against every man.

7.  There is no such thing as perpetual tranquillity of mind while we live here; because life itself is but motion, and can never be without desire, nor without fear, no more than without sense.

8.  Such is the nature of men, that howsoever they may acknowledge many others to be more witty, or more eloquent, or more learned; yet they will hardly believe there be many so wise as themselves.

9.  In the state of nature profit is the measure of right.

10. No man’s error becomes his own Law; nor obliges him to persist in it.

11. The obligation of subjects to the sovereign is understood to last as long, and no longer, than the power lasteth by which he is able to protect them.

12. That a man be willing, when others are so too, as far forth as for peace and defense of himself he shall think it necessary, to lay down this right to all things; and be contented with so much liberty against other men, as he would allow other men against himself.

13. Leisure is the Mother of Philosophy.

14. I put for the general inclination of all mankind, a perpetual and restless desire of power after power, that ceaseth only in death.

15. A man’s conscience and his judgment is the same thing; and as the judgment, so also the conscience, may be erroneous.