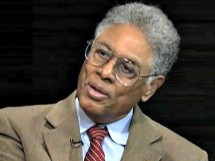 1.  It takes considerable knowledge just to realize the extent of your own ignorance.

2.  People who enjoy meetings should not be in charge of anything.

4.  It is hard to imagine a more stupid or more dangerous way of making decisions than by putting those decisions in the hands of people who pay no price for being wrong.

5.  If people in the media cannot decide whether they are in the business of reporting news or manufacturing propaganda, it is all the more important that the public understand that difference, and choose their news sources accordingly.

6.  The black family survived centuries of slavery and generations of Jim Crow, but it has disintegrated in the wake of the liberals’ expansion of the welfare state.

7.  Socialism in general has a record of failure so blatant that only an intellectual could ignore or evade it.

8.  If you have always believed that everyone should play by the same rules and be judged by the same standards, that would have gotten you labeled a radical 60 years ago, a liberal 30 years ago and a racist today.

9.  The least productive people are usually the ones who are most in favor of holding meetings.

10. The word ‘racism’ is like ketchup. It can be put on practically anything – and demanding evidence makes you a ‘racist.’

11. Facts are not liberals’ strong suit. Rhetoric is.

12. The real goal should be reduced government spending, rather than balanced budgets achieved by ever rising tax rates to cover ever rising spending.

13. Liberalism is totalitarianism with a human face.

14. Do countries with strong gun control laws have lower murder rates? Only if you cherry-pick the data.