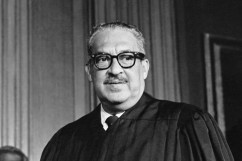 1.  Where you see wrong or inequality or injustice, speak out, because this is your country. This is your democracy. Make it. Protect it. Pass it on.

2.  Each of you, as an individual, must pick your own goals. Listen to others, but do not become a blind follower.

3.  In recognizing the humanity of our fellow beings, we pay ourselves the highest tribute.

4.  None of us got where we are solely by pulling ourselves up by our bootstraps. We got here because somebody – a parent, a teacher, an Ivy League crony or a few nuns – bent down and helped us pick up our boots.

5.  Surely the fact that a uniformed police officer is wearing his hair below his collar will make him no less identifiable as a policeman.

6.  A child born to a Black mother in a state like Mississippi… has exactly the same rights as a white baby born to the wealthiest person in the United States. It’s not true, but I challenge anyone to say it is not a goal worth working for.

7.  It is important that the strongest pressures against the continuation of segregation, North or South, be continually and constantly manifested. Probably, as much as anything else, this is the key in the elimination of discrimination in the United States.

8.  If the First Amendment means anything, it means that a state has no business telling a man, sitting alone in his house, what books he may read or what films he may watch.

9.  What is the quality of your intent?

10. This is a great country, but fortunately for you, it is not perfect. There is much to be done to bring about complete equality. Remove hunger. Bring reality closer to theory and democratic principles.

11. Sometimes history takes things into its own hands.

12. I have a lifetime appointment and I intend to serve it. I expect to die at 110, shot by a jealous husband.

13. It was taken for granted that we had to make something of ourselves. Not much was said about it; it was just in the atmosphere of the home.

14. Our whole constitutional heritage rebels at the thought of giving government the power to control men’s minds.

15. Deciding not to decide is, of course, among the most important things done by the Supreme Court. It takes a lot of doing, but it can be done.