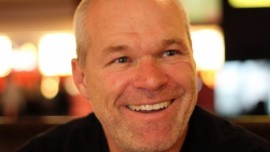 2.  Interview with a Vampire was lots of sex, so I’m not sure.

3.  Take the hardcore gamers. The characters are way more real in the world of hardcore gamers who have played the game for hundreds of hours. They have the movie in their heads, they’ve built it on their own. These guys are always very disappointed in the movies.

4.  So if you want to have a great video game-based movie you have to keep the mood of the game, use the normal character setup – but you have to flesh out the story and provide more background for the characters.

5.  We work very cost effective and I sell my movies in 100 territories on my own.

6.  Homer is the nice side of Al Bundy with the same intellect. I really like him and Al Bundy.

10.  Now while the German money is over for Hollywood, I still have $80 million to make movies, and we will have two things coming up: less major movies and the price for actors will go down.

12. Agents are still asking for millions of dollars for actors that don’t sell one ticket.

13. So if I get these actors for 30% of their price by coming in so late with an offer when they know they are not getting another offer then I do it this way.

14. In The Name of the King is the right title. To be honest, I don’t know who had the final idea for the title but I liked it and it has a strong connection to the movie’s story.

15. In the Seventies, a lot of executions via electric chair failed because of technical problems. Seed tells the true story of someone who survived and sought revenge. They buried him alive to make it seem he was dead.