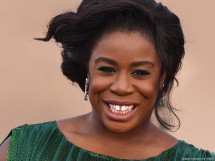 1.  My family is from Nigeria, and my full name is Uzoamaka, which means ‘The road is good.’

2.  I am the daughter of Nigerian immigrants. My mother is a survivor of both polio and of the Igbo genocide during her country’s civil war in the late 1960s.

3.  I left my home in Massachusetts after college to move to New York City to pursue my dreams of acting. I took roles for free. I waited tables. I didn’t care because it was work.

4.  I kept hiding my smile in pictures throughout middle school and most of high school until picture day came my senior year.

6.  People were stopping me on the street to say, ‘Oh my God, it’s Crazy Eyes!’ Which is kind of a funny thing to have people shout at you on the street.

7.  My mother is a fighter. After she battled polio and learned to walk again, the doctors told her she would be a cripple her entire life. Instead of accepting defeat, she refused this fate and went on to become the West African Women’s Singles tennis champion in college.

8.  My finding of myself as an artist, which I think in itself helped me to find just who I am and how I want to express myself, is entirely – in conjunction, of course, with my family, particularly my mom – founded on teachers.

9.  When it comes to inmates, we have boiled them down to just the few things we know about them – their crime, their current life situation, their identification number. But the reality is they were something before they were their crime.

10. I try to play serious scenes a little funny and the comedy a little serious.

11. I think there’s something really thrilling to having to get people laughing about something, and then, when you have them in that comfort space, you can drop the weight into the texture of the story.

12. In performance, you don’t always feel that sort of family bond right off the top. It sort of develops and grows over time.

14. I think it’s always a good idea to dress as someone you like, as long as it’s done in good taste. That’s the key.

15. I might literally fall over dead if I meet Oprah Winfrey. I’m kind of joking, but I’m not confident that wouldn’t happen.