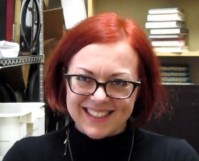 1.  Fencing is a game of living chess, a match where reflexes only work in combination with intent, and mind and body must work together at every moment.

3.  Young people like to think they’re invincible. They don’t like to face any situation where they’ve gotten weaker instead of stronger.

4.  I love being new places and hate getting there, and have been known to say on multiple occasions that I would give anything from a piece of my soul to a limb to a portion of my life savings to teleport. Especially when bad weather keeps me off planes.

5.  So many people think that if you’re writing fantasy, it means you can just make everything up as you go. Want to add a dragon? Add a dragon! Want some magic? Throw it in. But the thing is, regardless of whether you’re dealing with realism or fantasy, every world has rules. Make sure to establish a natural order.

6.  I almost always start with setting! I have to know the world before I know how to populate it. I have a tendency to play with doors – between life and death, human and monster, mundane and magic – and with ‘ADSOM,’ I knew I wanted to play with the physical doors between worlds.

9.  As for advice for aspiring authors, the best I can give is to be brave. It sounds like a simple enough thing, but it’s not. Rejection is such an integral part of this journey, and it never goes away.

10. I still get rejections – frequently – and my goal isn’t to never fail, to never be turned down, but simply to succeed more often than I don’t. And in order to do that, I have to constantly put myself out there, to judgment, critique, and rejection.

11. I am a firm believer that a good plot makes for a fun enough read, but it’s not what binds us. If we don’t care about the characters, we won’t care – not in a lasting way – about what’s happening to them.

12. I think a lot of writers are tempted to add complexity by over-complicating things, but always remember that most natural rules/laws are, at their core, simple. Start simple, and build from there, or you risk getting yourself and your readers tangled.

13. It’s always hard, when introducing readers to a new world/set of rules, not to lay it all out manual-style in the opening chapters but make sure to put the action and the characters at the front. If people don’t become invested in them and in the story, the world in which it’s set will become a burden.

14. I’d grown up an athletic child, a competitive soccer player since age 4, with stints ranging from months to years in gymnastics, softball, volleyball.

15. I was fourteen, watching ‘The Princess Bride’ for the 254321th time, captivated by Wesley and Inigo dueling on the cliff-top. I had never held a sword in my life, but I phoned my mum and said, ‘I want to learn to fence!’