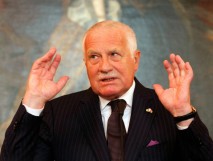 1.  What we want is to establish the rules of a market economy – not to plan its outcome.

2.  Nevertheless, there is another threat on the horizon. I see this threat in environmentalism which is becoming a new dominant ideology, if not a religion. Its main weapon is raising the alarm and predicting the human life endangering climate change based on man-made global warming.

3.  To pursue a so-called Third Way is foolish. We had our experience with this in the 1960s when we looked for a socialism with a human face. It did not work, and we must be explicit that we are not aiming for a more efficient version of a system that has failed.

4.  By the time I returned to Czechoslovakia, I had an understanding of the principles of the market.

5.  I also helped write the five-page statement of principles that Civic Forum issued in late November. That was the first public expression of what the new government wanted to do.

6.  I never intended to be a politician or office-seeker.

7.  I was paid to read Western economic texts. In a way, the regime paid for their own undermining.

8.  It is what makes the reform process an art, not just a science. You have to develop a strategy that tells you what reform measures you should follow and in what sequence.

9.  Privatization of the state-owned economy is not yet on the agenda. We cannot do it immediately; my colleagues would not agree to it. But we must put all forms of ownership on an equal footing immediately and let different types of ownership compete with the state firms.

10. That means following a very restrictive fiscal and monetary policy which will squeeze the monopolies and cut their subsidies. On the micro level we will allow other economic agents, both domestic and foreign, to compete with them.

11. The events in the square, of course, made a deep impression on me and many other parents.

12. We must have the time to create strict rules so that property is not sold by Communist managers for a low price. They often get payments under the table to sell to the first bidder. This does not build public support for a market economy.

13. We served on the editorial board of a literary monthly called Face in 1968 and 1969. He was a young writer, and I was also interested in broad cultural issues. We agreed on all major issues and became friends.

14. We will also allow state companies to sell shares to their workers and will pass a law allowing citizens to start companies of their own with no limits on the number of employees or on the firm’s output.

15. People like me who were engaging in brinkmanship with the party economic bosses and the open dissidents who were being arrested were pursuing a common goal in different ways.