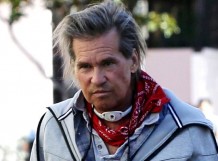 1.  I don’t think of my life as a cliche, but I’m a cliche eccentric. Complete with a strange name – I mean, who’s named Val? How many Vals do you know? I mean, really?

2.  It’s the first time that I’ve ever had an art show based on a film, but it’s a photography collage.

3.  Without deadlines and restrictions I just tend to become preoccupied with other things.

4.  One out of 100 citizens of the U.S. is going to prison, and it’s not that the system is making criminals, it’s that it’s making criminals better criminals. We’re breeding them like rats and it has to change.

5.  Youth is seen as everything. You don’t know anything when you’re young. It’s great being older, just having a more balanced perspective. I wake up and realise that what seemed to be important last year no longer is. I’m increasingly grateful for every day.

7.  There are a thousand ways to play any role.

8.  Hollywood’s like a warehouse. It’s just a place that you go. What’s interesting in the warehouse has to do with the creative people.

9.  I don’t watch television, but I saw ‘The Office’ by accident. I thought it was so sophisticated, the Victorian love story, and so bold. We’d do anything, all of us, to not work in that environment, and then I’m sitting there watching hours of it.

11. There are lots of actors who are awful people, but nobody talks about them being awful because they’ve made billions.

12. You just don’t understand humility until you have children and get divorced.

13. Warner Bros offered me the next Batman, and the only reason that I didn’t do it was because of The Saint.

14. We take what’s shown on television as the truth, and it isn’t. News isn’t even the truth on television. If you look up the definition of what news is, it isn’t that what we’re watching on the new – it’s entertainment.

15. There was no one around called ‘Val’ when I was young, so I wanted to be John or Bill. Now I like it.