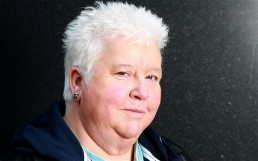 1.  One of the reasons we all still read Jane Austen is because her books are about universal things which still matter today – love, money, family. They haven’t gone out of fashion, so it’s not throwing the baby out with the bathwater to rework her in a contemporary style.

2.  The contemporary crime novel is, at its best, a novel of character. That’s where the suspense comes from.

4.  Sometimes fear is used as a way to control.

5.  It was a bit unimaginable when I began that I’d ever get to 25 books. But it was also unimaginable how much crime-writing would have changed.

6.  We weren’t dirt poor, but there was no spare money kicking around. While it was very much understood that the way to a better life was through education, books were a luxury we couldn’t afford. But when I was six, we actually moved opposite the central library, and that became my home from home.

7.  I’ve never wanted to live in a ghetto or write in a ghetto. I want to write about a world that reflects the one most people live in. Gay people are just one aspect of that.

8.  I came from a working-class family, but I was supported by a grant system and had my fees paid, so I came out of Oxford with a debt of something like £200.

10. On one hand, you’ve got ‘decent’ men, and on the other you’ve got neanderthal misogynist bawbags – and the middle ground is what’s disappearing.

11. Growing up in Fife, you were aware that there were these creatures called lesbians, but it was in the realms of complete freakishness. And I didn’t feel like a freak.

12. There is still a funny notion that women should not write violent fiction.

13. The condition of rage is one in which I find myself starting my day – once I see the news headlines.

14. I spent a lot of time at my grandparents in the school holidays, and the only books in the house were a copy of the Bible and Agatha Christie’s ‘Murder at the Vicarage.’ I developed a taste for murder mysteries and then later discovered libraries, second-hand bookshops, and jumble sales.

15. I don’t think of myself as Scottish or lesbian when I sit down and write. I am glad I have broken out of that limited audience.