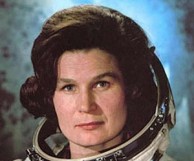 2.  A bird cannot fly with one wing only. Human space flight cannot develop any further without the active participation of women.

3.  More women should actively participate in space flight. There are many well educated women working in the space industry; they are very good candidates.

4.  I am deeply grieved by the loss of the crew of Columbia. I express my sincere condolences to the families and friends of the astronauts. I believe that their names will remain as the bright sparkling stars in the universe and will light the way for those who will follow them on the difficult roads of space exploration.

6.  Once you’ve been in space, you appreciate how small and fragile the Earth is.

7.  One cannot deny the great role women have played in the world community. My flight was yet another impetus to continue this female contribution.

8.  If women can be railroad workers in Russia, why can’t they fly in space?

9.  I am very resourceful, as any woman would be.

10. You don’t think about the danger. The spaceship becomes your home.

11. The missing toothbrush was nothing compared with the fact that the spacecraft was orientated to ascend, not descend. I would have gone up and up instead of going back down to the ground.

12. After being once in space, I was keen to go back there. But it didn’t happen.

13. Of course, it’s a dream to go to Mars. I want to find out whether there was life there or not. And if there was, then why did it die out? What sort of catastrophe happened?

15. It doesn’t matter what country or what political system you are from. Space brings you together.