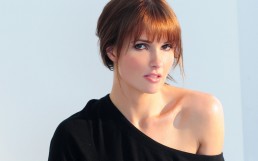 1.  I love watching old sitcoms. It’s very inspiring to watch ‘Mary Tyler Moore’ and ‘Golden Girls.’ I have watched them over and over again for years.

2.  If I could kidnap Bryan Doyle-Murray and force him to be in my family, I would. I love him; I really do.

3.   I started in high school and regional theater. Anything that came into town, I wanted to be involved in, because I just wanted to learn.

4.  I would recommend going out for more independent films. You can get bigger roles and really work your acting chops and build a reel.

5.  On the day of the audition for ‘Sullivan and Son,’ I had three other auditions all around Los Angeles. It was so hectic. I remember changing in my car before I went in to read.

6.  My idol is Bea Arthur. I really tried to follow her example. She is one of my comedy ‘she-roes.’

7.  Do not let yourself get in your own way. Don’t judge yourself and knock yourself down. There is enough of that out there already. Remember: you are an artist, and you bring something special to this craft. Take in notes and criticism, but don’t let them define you. Don’t try to become a watered down version of yourself.

8.  There’s something really cool about TV. TV, you get the luxury of having the same people around. It is such a blessing when you get a TV job. You really have a chance to get to make, like, work friends. I think TV is one of the few mediums where I’ve had the opportunity to get to know my crew members.

9.  Personally, I love theater; that’s where I started.

10. I feel really proud of my work on ‘Sullivan & Son.’ It’s a really different character for me. I was excited to play this really tough, sweet smart, quirky girl because that’s who I am at my core, but that’s never who I was playing. The show is like my pride and joy.

13. I am not gonna say that a guy’s looks make him have to try harder in any way. I don’t believe that at all. I think if he is funny, smart and cool, he’s all set. Looks are not very important to me.

14. Working out should be a key part of your life but not your whole life. When it is all a man could talk about, it becomes too much.

15. I think I have lived in every part of L.A. except downtown. Everywhere from Topanga Canyon to Toluca Lake.