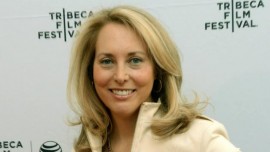 1.  I am angry when I hear things like Cheney whispering into Bush’s ear on the way to Obama’s inauguration to ask him to pardon ‘Scooter’ Libby and not to ‘leave a soldier on the battlefield’. What kind of metaphor is that for his petty partisan views, when you have men and women giving the ultimate sacrifice? I have nothing but contempt.

2.  The truth is, as long as nuclear weapons exist, we are not safe.

3.  These are issues we’ve been grappling with since the Constitution was written: how you hold your government to account for its words and deeds. It’s all about power and the abuse of power.

4.  Looking back at my career, I wish I knew then what I know now… that gender bias is built into the system, and it’s unconscious in many ways. I wish I had the maturity and courage to have pushed back more. I was always trying to be a ‘good girl’ and play by the rules.

5.  When you work for the C.I.A. or as a diplomat, or serve in the military, you’re not serving as a Democrat or a Republican; you serve as an American, whatever your personal moral compass or political views might be. So that would describe me.

6.  One characteristic that I hope I never relinquish is an intense curiosity about the world around me.

7.  If Russia did interfere in our election – and, by most accounts, they did – then it is imperative for the health of our democracy to have a thorough and unbiased investigation into the matter.

8.  I really believe the nexus of terrorism and nuclear weapons is the world’s most ominous threat.

9.  Joe was being called a liar and a traitor; I’m being accused of nepotism, of being a glorified secretary. The stresses that that places on an individual and, of course, a marriage were tremendous. It was – there were some dark days.

10. Of course we wish that more people involved in the leak of my true CIA identity had been prosecuted, but the system worked.

11. The intelligence community really is a vast bureaucratic entity, and it has been politicized in ways that are not effective for the gathering of intelligence and giving it to senior policymakers.

12. Whatever you think of Trump, I think most people would agree he is impulsive, and we certainly have an impulsive leader in North Korea in Kim Jong-un. That’s an unholy combination.

13. Privatization is more efficient and effective in some cases, but not in intelligence.

14. Our mission was to make sure that the bad guys, basically, did not get nuclear weapons.

15. The great thing about fiction is you can fix things and make things better.