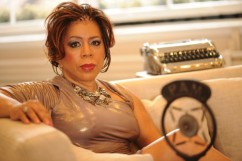 1.  It’s interesting when you’ve been a partner with someone for so long. So now to sing solo and starting all over again I am learning that I am more bodacious than I thought. I don’t know where it’s coming from but I am glad.

2.  Motown was the mecca. It was every writer’s dream to work there.

3.  I was a good sight reader and I could sing two or three of these jingles a day. An orchestra would come in for half an hour, and then the singers would come in and knock ’em out, and go on to the next one. I was the voice of Budweiser and Almond Joy.

4.  There is a formula that allows you to write a decent song. But a song like ‘You’re All I Need to Get By,’ it just writes itself.

5.  Both my grandmothers had upright pianos, and I just knew how to play since I was a child. Nobody taught me. I sounded like a grown-up, and then I learned how to read music. I played so well by ear I could fool the teacher to believe I could play the notes. She’d make the mistake of playing the song once, and I could play it.

6.  And it’s a lot harder to hide with four musicians than it is with eight.

7.  It’s a songwriter’s dream to have a song recorded and run up the charts.

9.  In transition I think the spirit goes somewhere, but I don’t think it leaves.

10. When you’re a producer and an artist you’re very critical of yourself. I like to produce other people, but I’m not that good at producing myself.

11. I guess I’m in a state of becoming. Even though I’ve had a full career and I’ve been around a long time, it’s like dinosaurs are coming back. It’s all new. I’m having to be on my own and seeing how exciting life can be now.

12. Nobody in my family was musical. I had no idea you could be a songwriter and make a living at it. It was all discovery. It was all just thrown at me.

13. My daughters are here, and that makes me feel good. And with the spirit of Nick Ashford, I think I’ll make it through. I have no choice.

14. I’ve already lived one full life, and so now I’m about to endeavor to see what else the good Lord has in store for me, and I’m wide open.

15. Sometimes you want a Part Two in your life.