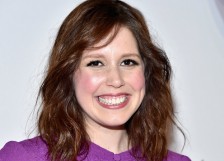 1.  It’s totally my dream job. I grew up watching ‘Saturday Night Live.’ We’d watch it at sleepover parties and quote it.

2.  Cleveland gets crapped on a lot.

3.  I had been on this improv team at this really great improv theater. It’s called iO now. It used to be called Improv Olympic. They have showcases for Lorne Michaels and other writers and people who work at ‘SNL’ usually about once a year, although I don’t know if it always happens.

4.  There are just so many funny kids and teenagers. They’re just not aware of how funny they are.

5.  I’ve been watching a lot of A&E’s ‘Intervention.’ I know that’s sort of depressing, but I love watching it.

6.  The town I grew up in was at least fifty percent Jewish, so every weekend in the 7th grade, we went to Bar and Bat Mitzvahs.

7.  My dad is a really funny guy, and we would make jokes about my leukemia. When my friends would come over, we would joke about it, too.

8.  Being sick is the reason I went into comedy.

9. It’s so funny: at ‘SNL,’ Bill Hader always kind of treated me like his little sister and would kind of, like, lovingly bully me.

10. I do think that the audience thinks it’s funny when you break, but if you do it all the time, it loses something.

11. With ‘Trainwreck,’ because it wasn’t live and we could do more takes, I feel like we broke a lot.

12. My fridge is usually pretty empty. If I can get it together to order FreshDirect, I will have some fruit and yogurt in the fridge. But there isn’t a ton of stuff you would cook with.

13. People think New York is crazy and busy, but it’s actually a great place for lazy people to live.

15. Every sketch goes through a rewrite stage where a group of writers sits around a table and pitches more jokes and ideas for the piece.