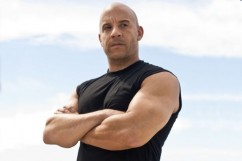 1.  It’s insecurity that is always chasing you and standing in the way of your dreams.

2.  A person in my position has to restrain himself.

4.  If you had asked me back in grade school what I wanted to be when I grew up, I would have said my first choice was an actor, but if I couldn’t be that, I’d want to be a superhero.

5.  It wasn’t until I went to college and I got my first motorcycle that I understood the thrill of speed.

6.  My mom used to say that I became a fighter and a scrapper and a tough guy to protect who I am at my core.

7.  I’m the most ambitious person you ever met.

9.  If you take my performance or my understanding of the role and my appreciation for story and then dress it in CGI, that I guess becomes an action film.

10. We all deal with being unfairly judged.

11. I’m not really afraid of the dark, except if I’m walking. The thing that scares me the most is the possibility of walking into a wall and busting my lip.

12. My gut feeling about sequels is that they should be premeditated: You should try to write a trilogy first or at least sketch out a trilogy if you have any faith in your film.

14. With age, you get to a place where you don’t want to knock people out. You just want to give people a hug.

15. The one thing I will never do is become pigeonholed.