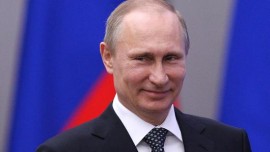 1.  Sometimes it is necessary to be lonely in order to prove that you are right.

2.  Terrorism has no nationality or religion.

3.  We need business to understand its social responsibility, that the main task and objective for a business is not to generate extra income and to become rich and transfer the money abroad, but to look and evaluate what a businessman has done for the country, for the people, on whose account he or she has become so rich.

4.  Those who fight corruption should be clean themselves.

5.  The ability to compromise is not a diplomatic politeness toward a partner but rather taking into account and respecting your partner’s legitimate interests.

6.  The centuries-old history and culture of India, majestic architectural monuments and museums of Delhi, Agra and Mumbai have a unique attractive force.

7.  We are all different, but when we ask for the Lord’s blessings, we must not forget that God created us equal.

8.  I don’t read books by people who have betrayed the Motherland.

9.  Whoever does not miss the Soviet Union has no heart. Whoever wants it back has no brain.

10. Everything will probably never be OK. But we have to try for it.

11. In many countries today, moral and ethical norms are being reconsidered; national traditions, differences in nation and culture are being erased.

12. You must obey the law, always, not only when they grab you by your special place.

13. Nobody should have any illusion about the possibility of gaining military superiority over Russia. We will never allow this to happen.

15. It’s a historical phenomenon that in 250 years, a nation could move from a colony into the most prosperous nation of the world and the leader of the world. It is indeed an achievement, a tribute to the talent of the American nation, the American people and an optimal political and economic system.