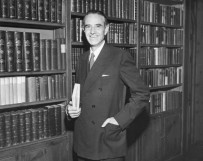 1.  It never occurred to me that we would have as grandiose a program as the Marshall Plan, but I felt that we had to do something to save Europe from economic disaster which would encourage the Communist takeover.

2.  Roosevelt was the one who had the vision to change our policy from isolationism to world leadership. That was a terrific revolution. Our country’s never been the same since.

4.  We both agreed that Stalin was determined to hold out against the Germans. He told us he’d never let them get to Moscow. But if he was wrong, they’d go back to the Urals and fight. They’d never surrender.

5.  Yet the whole preamble of the second authorization act for the Marshall Plan showed the direction Congress was ready to take about breaking down barriers within Europe.

6.  As far as the Russians were concerned, I felt the reverse; they had adequate gold, if they wanted to buy, and they weren’t dependent upon international trade. I felt they were more self-sufficient.

7.  Poland, of course, was the key country. I remember Stalin telling me that the plains of Poland were the invasion route of Europe to Russia and always had been, and therefore he had to control Poland.

9.  Conferences at the top level are always courteous. Name-calling is left to the foreign ministers.

10. Americans wanted to settle all our difficulties with Russia and then go to the movies and drink Coke.

11. We became convinced that, regardless of Stalin’s awful brutality and his reign of terror, he was a great war leader. Without Stalin, they never would have held.

12. Much of the aid we first gave to Russia we took away from what we promised Britain. So in a sense, Britain participated in a very real way in the recovery of Russia.

13. It was fear. He didn’t want to see a united Germany. Stalin made it clear to me – I spoke with him many times – that they couldn’t afford to let Germany build up again. They’d been invaded twice, and he wasn’t willing to have it happen again.

14. There’s a myth that Roosevelt gave Stalin Eastern Europe. I was with Roosevelt every day at Yalta.

15. Roosevelt was determined to stop Stalin from taking over Eastern Europe. He thought they finally had an agreement on Poland. Before Roosevelt died, he realized that Stalin had broken his agreement.