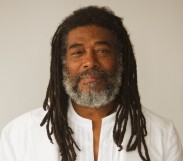 1.  When you live in the South, you’re constantly part of the civil rights movement.

2.  Everything and anything is valuable.

3.  Seeing the bigger picture opens your eyes to what is the truth.

4.  The artist is the consciousness of society… but musicians’ role is very special.

5.  I think all art is, by nature, intended to motivate society for change, and the only reason change doesn’t happen is because within the target population, courage is lacking.

6.  From now back to the past, we can observe clearly that none of us is free.

7.  I wanted to identify that the black experience is American experience.

8.  When Barack Obama was elected, it immediately brought out all the differences in society.

9.  I’ve got that Beethoven energy, that Stravinsky energy. And it’s all a gift from the Creator.

10. There’s nothing unnatural in creation.

11. The only thing that makes change possible is the idea of developing some kind of institution, because the institutions will survive individuals.

12. I’m an optimist. I have always been, and I will continue to be. So I believe there’s always a possibility of transforming or changing or doing something different.

13. My solo playing utilizes the deployment of suggestive psychic rhythms. I’ll state these throughout a given piece and play thematic improvisations on top of that. I like to suggest that rhythmic movement without always playing it. I like to create openings that I can step into.

14. Jazz infers a style, but creative music has a wider field and wider specification about it. We know it from people like Scott Joplin and on through Bessie Smith.

15. When I first started, I worked with my father, Alex ‘Little Bill’ Wallace; he was a guitarist like B.B. King. I was around 13 when I started, and I learned a lot by looking and listening. I learned how to be a bandleader from watching that band work.