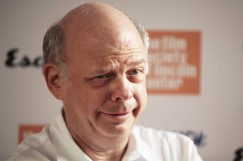 1.  ‘The Princess Bride’ is by far the most popular film I’ve ever done. I don’t think I’ll ever top it.

2.  Contrary to the popular misconception, the actor is not necessarily a specialist in imitating or portraying what he knows about other people. On the contrary, the actor may simply be a person who’s more willing than others to reveal some truths about himself.

3.  Even with my wife, I find sharing soup is hard.

4.  I do things, and other people laugh at them. I rarely know what the joke is supposed to be or why they’re laughing.

5.  After being in one movie, it didn’t seem like that would be my life. I had done several jobs, briefly. I’d been a shipping clerk, I worked in a copy shop, I didn’t think the acting was going to go on and on.

7.  I have been vain since birth. I expected other people to like what I did, although my vanity has definitely diminished over the years.

8.  I never planned to be an actor. It turned out I could make a living doing it.

9.  I see myself as a citizen of the planet. Even as a child, I always found it mindless to root for your own team. I was puzzled by the fact that people said their own team was better than other teams simply because it was theirs.

10. I sincerely believe that if Bush and Cheney recognized the full humanity of other people’s mothers around the world, they wouldn’t commit the crimes they commit.

11. For me, a play is a form of writing which isn’t complete until it is interpreted by actors. But it’s still a form of writing. And so most of my time is spent thinking about how to write a sentence.

13. We’re in an emergency situation. The United States has become an absolutely terrifying country, and I would hope that I could participate in some way in stopping the horror and the brutality.

14. I don’t happen to have a sense of humor personally, so I don’t know what’s funny about a character… This happens to be a feature of my life generally.

15. The actor’s role in the community is quite unlike anyone else’s. Businessmen, for example, don’t take their clothes off or cry in front of strangers in the course of their work. Actors do.