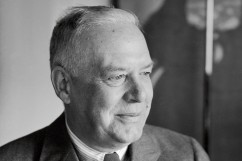 1.  Perhaps the truth depends on a walk around the lake.

2.  The day of the sun is like the day of a king. It is a promenade in the morning, a sitting on the throne at noon, a pageant in the evening.

3.  Accuracy of observation is the equivalent of accuracy of thinking.

4.  The most beautiful thing in the world is, of course, the world itself.

5.  The only emperor is the emperor of ice cream.

6.  In the world of words, the imagination is one of the forces of nature.

7.  We say God and the imagination are one… How high that highest candle lights the dark.

8.  After the final no there comes a yes and on that yes the future of the world hangs.

10. Everything is complicated; if that were not so, life and poetry and everything else would be a bore.

12. How full of trifles everything is! It is only one’s thoughts that fill a room with something more than furniture.

13. A poet looks at the world the way a man looks at a woman.

14. Our bloom is gone. We are the fruit thereof.

15. The poet is the priest of the invisible.