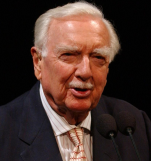 1.   In seeking truth you have to get both sides of a story.

2.  I covered the Vietnam War. I remember the lies that were told, the lives that were lost – and the shock when, twenty years after the war ended, former Defense Secretary Robert S. McNamara admitted he knew it was a mistake all along.

3.  America’s health care system is neither healthy, caring, nor a system.

5.  A liberal to me is one who – and it suits some of the dictionary definitions – is unbeholden to any specific belief or party or group or person, but makes up his or her mind on the basis of the facts and the presentation of those facts at the time. That defines what I am.

6.  I haven’t quite got the hang of this retirement thing.

7.  Watergate just happened to come along at the same time as the demand for honesty in relations between the sexes, in advertising, in ecology, in almost everything. It just stumbled into that great big elephant trap that had already been built for it.

8.  I worry that we’re not getting enough of the news that we need to make informed judgments as citizens.

9.  Objective journalism and an opinion column are about as similar as the Bible and Playboy magazine.

10. We are not educated well enough to perform the necessary act of intelligently selecting our leaders.

11.  It seems to many of us that if we are to avoid the eventual catastrophic world conflict, we must strengthen the United Nations as a first step toward a world government patterned after our own government with a legislature, executive and judiciary, and police to enforce its international laws and keep the peace.

12. I can’t imagine a person becoming a success who doesn’t give this game of life everything he’s got.

13. Our job is only to hold up the mirror – to tell and show the public what has happened.

14. There were a few youthful fishing trips, but I never enjoyed the experiences, partly because I didn’t like hurting the bait.

15. I think it’d be great if the evening news broadcast, for instance, were unsponsored and unrated.