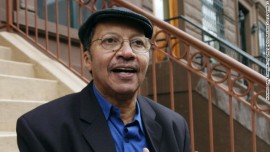 1.  I joined the army on my seventeenth birthday, full of the romance of war after having read a lot of World War I British poetry and having seen a lot of post-World War II films. I thought the romantic presentations of war influenced my joining and my presentation of war to my younger siblings.

2.  We need to tell kids flat out: reading is not optional.

3.  Thinking back to boyhood days, I remember the bright sun on Harlem streets, the easy rhythms of black and brown bodies, the sounds of children streaming in and out of red brick tenements.

4.  What I found fascinating was just how quickly the best of the young Negro League players were drafted into the major leagues once Branch Rickey broke the color line by hiring Jackie Robinson. It was clear that all of the major league owners already knew the talents of the black ballplayers that they had refused to let into their league.

5.  Each generation seems to invent its own reasons for war.

6.  One of the lessons learned during the Vietnam War was that the depiction of wounded soldiers, of coffins stacked higher than their living guards, had a negative effect on the viewing public. The military in Iraq specifically banned the photographing of wounded soldiers and coffins, thus sanitizing this terrible and bloody conflict.

7.  With my writing, what I want to do is humanize the young people I write about.

8.  And I see the – you know, when I go to the juvenile detention centers and prisons, I see people who can’t read now. And I know that when they leave those prisons and those detention centers, they’re not going to be able to make it in our society.

10. I was a good student, but a speech impediment was causing problems. One of my teachers decided that I couldn’t pronounce certain words at all. She thought that if I wrote something, I would use words I could pronounce. I began writing little poems. I began to write short stories, too.

11. I think that what we need to do is say, ‘Reading is going to really affect your life.’ You take a black man who doesn’t have a job, but you say to him, ‘Look, you can make a difference in your child’s life, just by reading to him for 30 minutes a day.’ That’s what I would like to do.

12. As a writer, I absorb stories, allow them to churn within my own head and heart – often for years – until I find a way of telling them that fits both my time and temperament.

13. I like people who take responsibility for their lives.

14. I had seen the ballet of ‘Swan Lake’ as a child but it was as an adult, when I saw a production featuring Erik Bruhn, that I first noticed how significant a part the ever-present threat of violence played. This juxtaposition of great beauty and grace with a backdrop of pure evil stayed with me for years.

15. I was teased if I brought my books home. I would take a paper bag to the library and put the books in the bag and bring them home. Not that I was that concerned about them teasing me – because I would hit them in a heartbeat. But I felt a little ashamed, having books.