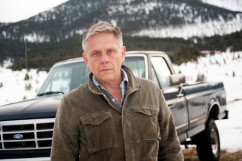 1.  Statistics on the dangers guns pose to the health of their owners and those who live with them suggest that I’d be safer selling my guns than reserving them for ‘Tombstone II.’

2.  A true nature is a gloomy monolith, sort of like that old black rotary phone that I had to sing ‘Happy Birthday’ to Grandpa on. But novelists, damn us, still need true natures – so we can give them to our protagonists. And so readers can vaguely predict how they’ll behave when we trap them in ‘situations’ that they can’t IM their way out of.

3.  The reason con artists get away with what they get away with is, their victims are ashamed of their own blindness and their own gullibility, and they tend to just quietly go away.

4.  We want to believe that we’re invulnerable, and that people who get tricked deserve it. Well, they don’t. And someday the arrogant types who mock the gullible are likely to get their turn to wear the dunce cap.

5.  The success that Americans are said to worship is success of a specific sort: accomplished not through hard work, primarily, but through the ingenious angle, the big break. Sit down at a lunch counter, stand back up a star. Invest in a new issue and watch it soar. Split a single atom, win a war.

6.  Everyone his own cinematographer. His own stream-of-consciousness e-mail poet. His own nightclub DJ. His own political columnist. His own biographer of his top-10 friends!

7.  Literary dementia seems dated now, but there was a time when a month in the funny farm was as de rigueur for budding writers as an M.F.A. is now. To be sent away was a badge of honor; to undergo electroshock, a glorious martyrdom.

8.  It’s no accident that most self-help groups use ‘anonymous’ in their names; to Americans, the first step toward redemption is a ritual wiping out of the self, followed by the construction of a new one.

9.  In the age of networked everything, life moves sideways and covers lots of ground while barely touching the earth.

10. Realize that the game of life is the game of, to some extent, being taken advantage of by people who make a science of it. Whether they are in government or personal life or in business, they’re everywhere.

12. Let the novelists fret about consistency – story writers should feel free to jam; to get things right in new, surprising ways by allowing themselves, now and then, to get things wrong.

13. In fourth grade, I learned that reading was serious business, not just a pleasant way to pass the time, and that like medicine or engineering, it had a definite, valuable purpose: to foster ‘comprehension.’

15. My mother used to push ‘Wuthering Heights’ on me as a boy, and I sensed from her breathy description of the story that it would make me laugh. I have no plans to find out if this is true.