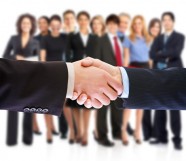 1) How it begins: A study has shown that almost half of the people passing by a building will stop and look up if they saw few people looking up. Now what if the first few people made a big mistake by looking at absolute nothing? wont they get followed by a very large number of people? Yes this will happen for sure and that’s the first reason why you should never follow a crowed unless you know what you are doing (see also Social proof theory)
2) Groups protect their beliefs by collecting the wrong evidence: A member of a group will always collect incorrect information or half complete facts just to prove his group’s beliefs true. Because our perception usually works on selective basis people end up believing more in the group they followed even if they weren’t sure about it in the beginning
3) Most people are attached to the status quo: Most people will never feel safe outside of their comfort zone and as a result they will keep reminding themselves that they are doing the right thing just not to admit that they are afraid to face their fears. A perfect example of that would be the miserable employee who hates his job yet keeps telling himself that he can never find another one
4) Most people distort their beliefs about reality: To escape from guilt, responsibility and to raise their self esteem. Most people lie to themselves and eventually believe the lies. A person might claim that he is happy with his life, even when he is miserable, just to feel good about himself (see also Self deception)
5) People infect each other with negative beliefs: Out of every 10 people who believe that a certain task is impossible you will find only one person who actually tried to do the task. While 1% of people take actions and build their own beliefs about life the remaining 99% acquire their beliefs from others without bothering to put them to test!

Crowd is basically nothing just that blind path basically people are following. Because if some one follows new path or makes their own path then according to the society he will be insane, crazy or mad..
But why we cannot think to make our own wings to fly. There are various reasons why we should have to make our own path not follow crowd.